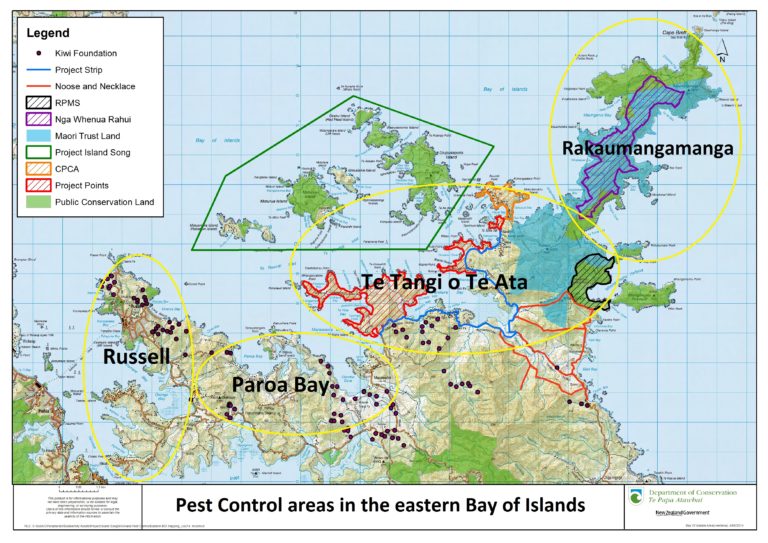 Project Strip (together with Project Points) was established in 2009 as part of Project Island Song, to reduce the chances of re-invasion of the Islands of Ipipiri by mustelids and rodents. John Booth set up Project Strip initially under the supervision of the Kiwi Foundation, Northland Regional Council, Department of Conservation and The Guardians.

Because it’s public land, Project Strip involves only traps. Thirty-eight key trap sites (each usually with one DOC 200, one Timms, and one Victor) were established along 13 km of roadside from Te Tawa just north of Te Rawhiti Marae and Te Huhuri (Dick’s Bay). Over time, in order to maximise effectiveness, certain traps have been removed and others added, giving a total at present of 148. Rawhiti trappers employed by REPNZ and funded by the EBoIPS, service the traps monthly.

Since most of the land bordering Project Strip is privately owned we are grateful to the numerous number of private landowners who carry out pest control on their own properties.

Project Strip and Project Points are part of the Mainland Pest Control initiative for the eastern Bay of Islands, which is guided by the community group Te Tangi o te Ata that meets every few months at Kaingahoa Marae.

A new focus of pest control in the eastern Bay of Islands is establishment of additional trap-lines between Te Akau (Elliot Beach) and Parekura Bay, complementing similar lines around Whangamumu and across 3B2 Maori Trust Land and helping create a pest control barrier across the base of the Cape Brett Peninsula.